I. Multiple Choice Questions :
Choose the correct from the given four options.

Question 1.
In the given figure, AB is a chord of a cirde with centre O and AB is produced to C such that BC = OB. Also, CO is joined and produced to meet the circle in D. If ∠ACD = 25°, then ∠AOD = ? Question 17.
In the adjoining figure, sides AB and AD of quadrilateral ABCD are produced to E and F respectively. If ∠CBE = 100°, then ∠CDF =? II. Fill in the Blanks:

Question 1.
The region between an arc and the two radii, joining the centre to the end points of the arc is called __________
Answer:
sector

III. True/False :
State whether the following statements are True or False.

Question 1.
Line segment joining the centre to any point on the circle is a radius of the circle.
Answer:
True

Question 2.
If a circle is divided into three equal arcs, each is a major arc.
Answer:
False

Question 3.
Every circle has unique centre and it lies inside the circle.
Answer:
True

Question 4.
Angles in the same segment of a circle are equal.
Answer:
True

Question 5.
Sector is the region between the chord and its corresponding arc.
Answer:
False

Question 6.
Length of all radii of a circle is same.
Answer:
True

Question 7.
The length of tangents drawn from an external point to a circle are equal.
Answer:
True

Question 1.
A chord of length 12 cm of a circle is at a distance of 8 cm from its centre. What is the radius of the circle?
Answer:
AB is a chord of a circle of radius r.

Question 2.
Three chords AB, CD and EF of a circle are respectively 3 cm, 3.5 cm and 3.8 cm away from the centre. Arrange the chords in ascending order of length.
Answer:
We know that of any two chords of a circle, one which is larger is nearer to the centre.
∴ EF is farthest from the centre and is the shortest chord.

Similarly, chord AB is nearest to the centre and is the longest chord.
∴ We can say that AB > CD > EF

Question 3.
How many points are required to determine a unique circle?
Answer:
3 non-collinear points. 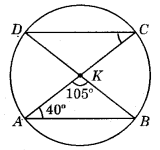 Question 3.
If BM and CN are the perpendiculars drawn on the sides AC and AB of ΔABC, then prove that the points B, C, M and N are concyclic. Question 4.
Prove that the circle described on any one of equal sides of an isosceles triangle as diameter bisects the base.
Answer:
Given : An isosceles ΔABC in which AB = AC. The circle drawn on AB as diameter intersects the base BC of ΔABC at the point D. We need to prove that D is mid-point of BC.
As AB is a diameter, ∠ADB = 90° (Angle in a semicircle)
⇒ AD ⊥ BC
In ΔABD and ΔACD AB = AC
AD = AD
∠ADB = ∠ADC
∴ ΔABD ≅ ΔACD
∴ BD = DC

Question 5.
In the given figure, ABCD is a cyclic quadrilateral, in which AC and BD are its diagonals. If ∠DBC = 60° and ∠BAC = 30°, then find ∠BCD. Question 7.
In the given figure, AOB is a diameter of the circle and C, D and E are any three points on the semi-circle. Find the value of ∠ACD + ∠BED. Question 9.
A circle has radius √2 cm. It is divided into two segments by a chord of length 2 cm. Prove that the angle subtended by the chord at a point in major segment is 45°. Question 2.
Three STD booths situated at A, B and C in the figure are operated by handicapped persons. These three booths are equidistant from each other as shown in the figure. (i) Find ∠BAC
(ii) Find ∠BOC
(iii) Do you think employment provided to handicapped persons is important for the development of a society?
Answer:
Here, A, B and C represent three STD booths.
(i) Given: A, B and C are equidistant from each other.
∴ AB = BC = CA.
⇒ ΔABC is an equilateral triangle.
Hence, ∠BAC = ∠BCA = ∠ABC = 60°

(iii) Yes, employment provided to handicapped persons is important for the development of a society. It helps them to live with dignity in the society. Question 4.
Two circles whose centres are O and O' intersect at P. Through P, a line l parallel to OO' intersecting the circles at C and D is drawn. Prove that CD = 200.